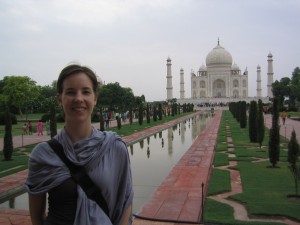 While in India for a month, I had to learn a few lessons that I will carry with me in the future.

1. Be proud of yourself

I was the only naturopathic student in my month-long program.  Every other person there was a student in medical school at mainstream colleges, mostly in the US.  I was also one of the oldest people, having worked for years before returning to school for naturopathic medicine – most of these students had entered medical school right after university undergraduate programs.  For all these reasons, I felt like the odd one out a lot of the time and this was hard for me since I was also dealing with culture shock in a new place. My interests, outlook, life experience, and attitude were so very different, even more so than I expected.  What I am passionate about was either uninteresting or completely unknown to my companions. During this experience I realized how important it is to remain true to oneself and that it isn’t always necessary to prove yourself to other people.

Having patience in India is key.  Or else you will go insane.  Things do not happen at the pace that you expect – some things are too fast (traffic!), but most things are very, very slow! For example, the distance from Delhi (where I arrived) to Dehradun is 235km.  In Canada, driving this distance would take about 2.5 hours.  This trip took about 8 hours by bus in India (including a stop for lunch).  On my way back from Dehradun to Delhi, the trip took about 5 hours by train.  So, it seems that due to poor road conditions, road closures/checkpoints, and traffic, travel by car takes about 3 times longer in India than Canada.  Even travel by train (which is much nicer, except for the restrooms) takes about twice as long.

The distance from Dehradun (where I was for 2 of the 4 weeks) to Agra (where the Taj Mahal is) is 381km.  In Canada, it would take about 4 hours to cover that distance.  The weekend I did it, we travelled for 12 hours overnight by car.  The trip went like this: left at 8pm from Dehradun and drove on bumpy, winding, congested, and LOUD roads until about 1am.  Stopped for tea. At this tea stop some of us got out of the car to walk around and were instantly surrounded by random men asking us all kinds of personal questions!  I got back in the car and stayed there.  I managed to sleep for about 2 hours total by listening to my iPod, creating a pillow from a raincoat, putting on an eye mask, and wrapping my head in a scarf (I wish I had a photo of this!).  We then continued travelling for a few more hours until we stopped at a closed gas station for a restroom break.  We reached our hotel in Agra at about 8am.  Quick change and breakfast, then spent the day sightseeing.  Stayed in Agra that night, then left the next morning at around 7am.  Our drivers tried to take a shorter route back, but it ended up being on worse roads, which ate up more time.  We stopped a few times for tea and lunch, and got pretty near Dehradun by about 7pm.  Then we got stuck in traffic due to either roadwork or partial flooding of the road.  Our driver drove on the shoulder AROUND the traffic to another route and then on dark, winding, guard-railless mountain roads (nearly flying off a few times!) until we reached our destination by about 10pm.  In total, 12 hours to Agra, 24 hours in Agra, then 15 hours back to Dehradun.

Another memorable story: I budgeted a certain amount of money for my trip, but that did not end up being enough, so I tried to use my bank card at a few Indian ATMs with no luck.  So I tried talking to the banks – again no luck.  Then I tried using my credit cards to get cash, but couldn’t because I didn’t have a PIN set up…  So, I started to get a bit panicky – here I am in a foreign country running out of money!  I would exchange traveller’s cheques or US cash at a particular foreign exchange place and I heard that they could also do a credit card advance without a PIN, so I headed there.  Usually I was served by the man who seemed like the owner or his wife, both of whom were professional, efficient, and friendly.  However, this one day I rushed over there during a short break in my day (through deadly traffic amid dust and noise and chaos) desperate to get some cash before I left town for the weekend and was served by a different guy who was quite possibly the slowest human being I have ever encountered!  He clearly had little idea how to do this transaction and I was so nervous that he couldn’t do it, or the phone line would be down, or my credit card wouldn’t go through, or whatever that I must have been shaking!  I realized in this moment that this was a HUGE test of my patience!  And that there was nothing I could do to make anything go faster or work better…  And then I chose to stop worrying.  Not an easy thing to do, for sure, but still possible!  Everything worked out OK in the end and I managed to make it to my next destination on time, so worrying and being impatient would have been an unnecessary stress.  I am so thankful for this and other experiences because they have given me much needed practice at being PATIENT, a skill I can definitely use in my life.

During most of my month in India I had a cell phone provided by the program.  However, on my last day in Dehradun before heading to Delhi to fly back to Canada, I no longer had my cell phone because we had to turn them in the previous day.  Some other students, two coordinators, and I headed downtown to run various errands.  I needed more cash (again!) while the others headed to an internet cafe and a cell phone store.  I agreed to go get my cash then head to the internet cafe to meet back up with some of the others.  Seems simple, right?  Well, there are literally internet cafes one on top of another in this city and the one I THOUGHT I was supposed to go to was essentially empty.  So where were my people?  I couldn’t exactly go searching for them, since I barely knew where I was or where to begin.  At home if this happened to me, it wouldn’t be such a big deal, but try to imagine being alone and kind of lost in a noisy, busy, chaotic, and crowded place where you can barely recognize places you know and most writing is in a language you can’t read…  Without my dear cell phone!  Again, I realized in this moment that this was a test of my ability to fend for myself and figure myself out of my problem on my own (remain calm!).  First I realized that if I could not find anyone, I could still go do the other things I needed to and head back to my house on my own (I am capable, so go with the flow!).  I found and used a public phone for the first time to call one of the coordinators, whose phone number I thankfully had in my wallet (be resourceful!).  Turns out the number I had was for a different coordinator (remain calm!), but he gave me the right number (have faith!).  I went to a sweet shop to wait for him, but time passed and nobody showed…  Was I at the wrong place?  Totally possible given that businesses in India often have nearly identical names on the same street – they copycat each other frequently…  By coincidence, the other coordinator I had been with earlier showed up at this shop and then a couple others did too (have faith!).  Of course everything worked out fine…

4. Be prepared and keep learning

Prior to going to India, I did some research.  Reading novels, how to get around, cautions, tips, packing lists, maps, history, culture, food, language, etc. While there, I REALLY wanted to learn more, so I asked my host family A LOT of questions at every opportunity.  Politics, pop culture, clothing, food, arranged marriage, India perspectives on other countries, tips, language lessons, whatever.  You name it, I asked it!  I also decided that I would truly try to LIVE in India, instead of living as a Canadian in India.  This means thinking in rupees (not dollars!): evaluating prices based on the market (and not how much cheaper things were than at home) and bargaining fairly (rather than throwing money around because I was a “rich” Westerner).  This also meant learning and understanding customs in India and living by them – tipping, photos, attire, table manners, language, bargaining, attitudes, behaviour…  I know that I did not manage to blend in too well, but I made an effort to be observant and adjust myself to my surroundings.

As I wrote in a previous blog, you cannot be certain that what you think is polite/rude is viewed the same way in foreign countries.  This is what it means to be a conscientious traveller, I think.  And I think this is where “rude Americans” (and other Westerners, although most foreigners will assume we are also American) get into trouble.  I think most people are trying to be courteous and are unknowingly interpreted as rude because sometimes social norms are so different.  It is important to make an effort to be polite, but on whose terms?  What I think is much more difficult, but quite an important lesson, is to actually LEARN about the culture you visit and play by its rules rather than impose your own.  This means avoiding value judgements (“India is so backwards”) and instead making observations (“India is so different from my country”).  Through observation, you can see HOW something is different.  Through researching history and gaining experience, you can actually start to understand WHY.  If cultures are like people, the NATURE influences are the attributes randomly granted to it (location, climate, geography, natural resources, etc).  And not all countries start out with the same stuff (just as not all people do).  And, just like with people, understanding NURTURE (history, interactions with neighbours, etc.) is a major puzzle piece too.