I know I need vitamin D, but how much should I take?

This is a question I hear often, so today I thought I would share my own experience with vitamin D and provide a reminder of how important this vitamin is to health, especially in the winter!

What is vitamin D?

Humans primarily make vitamin D via our skin from exposure to ultraviolet light.  Actually, we make cholecalciferol which is converted into fully active vitamin D by our liver and kidney cells.  Vitamin D influences the following major areas of healthy function:

You can read more detail about Vitamin D’s Role in Health Support at the World’s Healthiest Foods page on vitamin D.

Beyond these major areas, there are many therapeutic uses of vitamin D supplementation and more emerging every day as research on vitamin D evolves.  In my practice, I consider vitamin D for many types of female hormone imbalance, elevated cholesterol, and long-term health promotion.

Most adults are deficient in vitamin D and can benefit from increasing their vitamin D.  According to Health Canada, only 1/3 of the population has vitamin D levels above 75 nmol/L, which is the lower level for “sufficiency.”

Why are we deficient?

Imagine how early humans lived…  They wore little clothing and spent most of their time outdoors in warm weather, so they made lots of vitamin D in the summer, which was stored in their bodies and used during the darker winter months.

Is this how you live today?  I doubt it!  Most of us spend most if not all our time indoors and when we are outdoors we cover up with clothing, hats, and sunscreen.  All of this means we make little to no vitamin D at all from the sun.

Unlike most other nutrients, there are few foods that provide vitamin D.  Because we mostly get vitamin D via the sun, food is really just a back-up support system in this case.

The World’s Healthiest Foods website only lists 6 foods as sources of vitamin D:

There are several other factors that impact vitamin D levels:

The test is best

My results: then and now

The first time I ever tested my vitamin D level was in September 2009.  At that time, I was already supplementing with 2000IU vitamin D3 daily.  I was not a big “sun-worshipper” but I tried to get outside regularly to run and never wore sunscreen unless I was going to be out in the sun for more than an hour.  As you can see, at that time, my vitamin D level was 77 nmol/L, just at the low end of “sufficiency”:

After my test in September, I increased my supplementation to 4000IU vitamin D3 daily over the winter and retested in February 2010:

As you can see, my vitamin D level increased in that 5 months to 87 from the increased supplementation.  Yay!

I recently decided to test my vitamin D again.  This time I used a different test that involves doing a finger prick in-office to collect a blood sample on a collection card and sending it in the mail for analysis.  Once again, my regular supplementation level was 2000IU vitamin D3 daily, and once again I was “mildly” deficient in vitamin D: 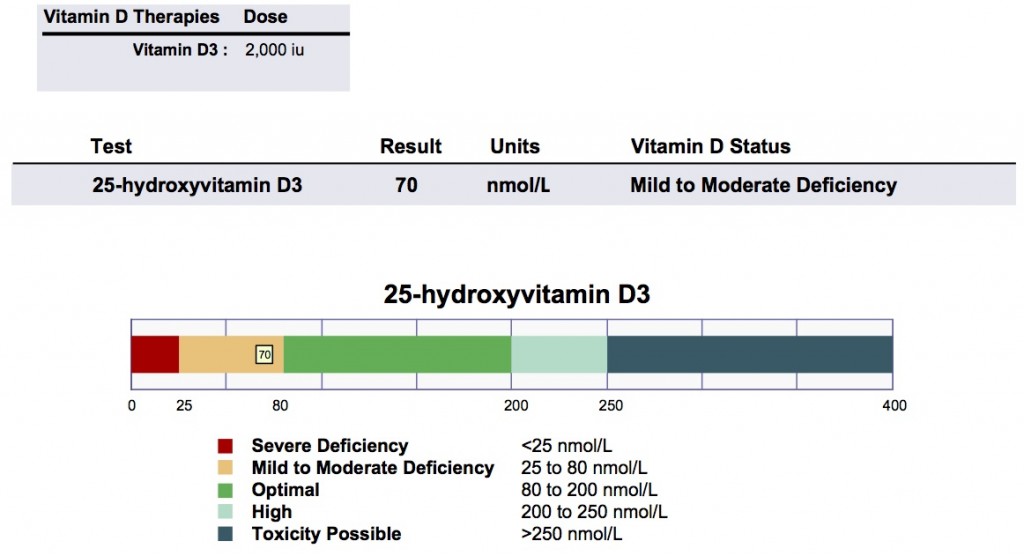 So, once again I’m going to increase my supplementation to 4000IU vitamin D3 daily and I should probably continue this dose or slightly lower to keep my levels in the optimal range.

Supplements: Healthy or harmful?
How will you die?

4 Responses to How much vitamin D is best?